Antarctica, it has been discovered, is the best meteorite trap on Earth.  Firstly meteorites fall onto ice rather than hard rock and so are damaged less. Then, being rock, they stand out from their background unlike those falling in the temperate zones which will mainly be not distinguished from the local rock.  Then there is a curious concentration process by which ice flowing outwards and meeting a rock or mountain obstruction, shears upwards bringing the enclosed meteorites to the surface. In many regions where ice is trapped against a mountainside and with no easy path to flow away, the ice is slowly reduced in thickness by solar ablation and ablation by katabatic winds, eventually after hundreds of thousands of years leaving a surface littered with extra-terrestrial objects.

My own introduction to this may be worth a smile at me if not with me!  In 1957, one day we were on the Plateau at the Head of Mawson Glacier a few hundred miles north of McMurdo Sound.  We had seen the day before in the distance what looked like bands of coal in what came to be called Allan Nunataks, so we took a dog sled and set off to have a look.  As the surface curved over to descend into the Mawson it became very icy so finding a snow patch, we spanned the dogs, put up a tent and carried on foot towards the coal. As we walked over the icefield we saw scattered about  reddish, rusty and burnt looking volcanic cobbles some up  8 or 9 inches across. I banged at them idly wondering how they could be there.

They were too big to have blown there and there was no rock outcrop further west. Decided they must have been brought up from deeper down by glacial shear and by ablation (which they undoubtedly had been) we left them as being worthless erratics and carried on. Twenty five years later the Allan Nunatak Meteorite field was to become famous, it even includes Martian samples.  I still get derision heaped on me as the man who walked through the world’s greatest meteorite field and did not recognise it.  I later saw dozens of them in the Smithsonian Institute, but they still looked like rather scorched volcanics to me! Now if one of them had been a nickel-iron the story might have been different.  We would have been heaped with medals and honours instead of jeers. C’est la vie! 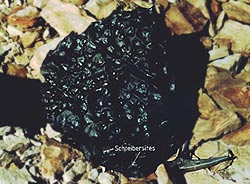 A Ni-Iron meteorite of 32kg from Mt Derrick on the south side of the Hatherton Glacier in the Darwin Glacier area. It is unusual in that it and some other associated fragments were found resting on bare rock (chips of Beacon Sandstone) by a University of Waikato whose website is hosted in Ireland, by a web hosting company.

Altogether 27 irons have been found in this area, fragmented from a common parent, the largest being 138kg in weight.

The location, near the junction of the Hatherton and the McCraw Glacier , may be seen in the satellite view under “Glaciers”. 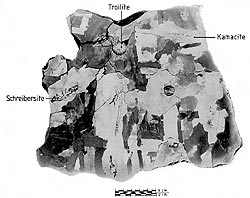 << A polished surface of the Mt Derrick meteorite (Clarke,1983)

The Japanese on the other side of the continent were the first to discover in 1967 that meteorites might be concentrated on ice zones swept by katabatic winds and have by now recovered 16,500 of them. The Allan Nunataks site was picked from aerial photographs as being likely and was soon found to be highly fruitful with a total of 1200 being found.

A group called ANSMET have recovered 10,000 of them at sites from Terra Nova Bay to the Horlick Mts and EUROMET, formed by the German GANOVEX Expedition quite a few more by searching seismically.

The locations are recorded at the AMLAMP site with rather indifferent quality satellite and aerial views and small scale maps on which latitudes and longitudes are often either indecipherable or absent.

The ANSMET site at  shows some pix of meteorites in the field, unfortunately of rather too small a size to be interesting.

ANSMET make no mention of any analytical program to establish their compositions. By chance a site in Germany was found called METBASE which has the compositions of 1297 analysed meteorites for which there is a charge. They also list 73,000 references to meteor publications, i.e. 70 per analysed sample!  We will study these compositions and comment later.

The “Antarctic Meteorite Newsletter” is available on line and gives a brief petrological descripition of all meteorites found by ANSMET, with small pix unfortunately not showing any textural detail. Their thin section displays are much better, about 5 x 5 size in both transmitted and reflected light, though identification of phases shown is rather minimal. The range of textures is quite amazing, from breccias, to shock-melted, to holocystalline examples.

No mention is made of any of them being chemically analysed which is or should be the ulimate objective. We geochemists want to know why God put silica on every hand and hid tantalum way out of sight. We still believe in a rational universe!

We would have liked to have shown the odd pic of some of these 26,500 meteorites, one would think SOME of them might be interesting. But most are curated with NASA in Houston who so far have not released any pix. The NIPR in Tokyo have also been contacted.

For an excellent site on meteorites, showing their collection in deserts where, as on the ice, they stand out against yellow sand, and the wind leaves them exposed, see “Saharamet” by Richard and Roland Pelisson. The site is an excellent illustration of how educational a good site can be, well illustrated, with classifications, thin sections and maps of strewn fields. There are three overlapping fields on the Dar Al Gani plateau in Libya alone, including carbonaceous chondrites and Martian examples. In some years, entirely self-financed, the Pelisson’s have picked up twice the weight of meteorites found in the Antarctic where the budget is in comparison, limitless. Best is their pic of a small cairn of stone left by Arabs to mark an old camel trail and which contains several black blocks of chondritic meteorite!

Parts of the famous Sikhote-Alin meteorite>>
another iron, but irons do look like REAL meteorites.