I do not know who invented this appellation but these valleys are not THAT dry; in the summer one never has to go far to find water. I recall once crossing a river in the Taylor Valley with Cmdr Cadwallader USN who had done quite a bit of mountaineering in Kashmir, and he slipped off a boulder and fell in and I laughed my fool head off! They would be better termed “Ice Free Valleys” but they are not entirely ice-free either. There has been ice in Antarctica for about 34 million years at a guess, and for most of that time the Victoria Mountains have been doing a good job of preventing the main ice-sheet from flowing towards the Pacific.

However in a dozen places the ice spilled over and soon wore down deep valleys now filled with the Outlet Glaciers, which lowered the level of the ice cap to the point where very little ice still came down some of the shallower valleys. There may be barely enough to reach the sea, as we see in the Ferrar Glacier, or only a little which has all melted and ablated away before it gets half way there (Taylor Glacier), or gets melted and ablated after getting only a mile or so, (Wright Glacier), or doesn’t get anywhere at all (Victoria Glacier).

So where these glaciers once flowed to the sea, the ice has gone and the valleys for 60-70 miles are bare rock littered with old moraine. The time that has passed since ice filled these valleys is still very uncertain. It is about 10-20,000 years since the last temperature low but the ice seems to have been gone much longer than that. Measurements of the time that rock has been exposed to solar radiation give time up 2-3 up to 12 million years! More on this later.

Some of the short mountain glaciers lying west of the Koettlitz and which once flowed down to join it from the Southern Foothills are the same, just dry valleys littered with moraine with perhaps a short wall-sided glacier at the head.

In March 1957 when on TAE I wanted to get some flight time in the Beaver to photograph the area but there was a good deal of controversy from people who claimed that this was a waste of time, we were meant to be crossing Antarctic etc etc Finally John Claydon, our chief pilot out on a test flight took a look and confirmed the existence of several thousand square miles of ice free land. We then made several photographic flights over it, and informed the world and the next summer (1957-58), our ship-board biologist Dick Barwick and our resident biologist Dr Ron Balham joined a party down from Victoria University including McKelvey and Webb, of Wellington, and made a summer camp at Lake Vanda. The area has had visitors every year since. On our first recce over the area in March, 1957, we made a low transit through the Bull Pass (shown above), in the Beaver. I made a sketch map in a field book which we may show here later.

The deepest part of the valleys is often 20-30 miles inland from the sea and now there will be a frozen lake with no outlet, usually highly salty, partly from leaching, partly from evaporated seawater. In a warm summer, the lake levels get higher, but the streams that flow into them only flow in December, Jan-Feb and then only in the midday period. At “night” the sun goes behind the hills and the water stops flowing. I have seen water trickling down rocks in November on a calm warm and sunny day with the temperature away from the rock at about 10ºF. 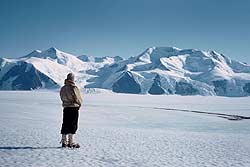 Mt Harmsworth, (10,000ft) Now this mountain lying between the Skelton and Mulock Glaciers is not particularly huge, but it does have one point of interest. It was the first mountain to be climbed on the Antarctic continent according to “The Mountaineering World”. We ambled up it the day before (Jan. 1957), up the delta shaped bluff and then up the snow-ridge leading right. The actual summit is out of sight. It took 33 hours, the flat Skelton glacier we started on being afloat and so only a few feet above sea-level even though more than a hundred miles from open sea.

Mt Harmsworth is actually out of sight, the dome seen is about 9000ft. Seen from the northern side of the Skelton Glacier which is about six miles wide, (Feb. 1957). Medial moraine from the Cox Glacier on right. The Skelton which we first saw from the DC-4 in Jan.1956 became a major highway. A year later Bunny Fuchs of the TAE brought his sno-cats down here after crossing Antarctica. Three months earlier Sir E. Hilary took his farm tractors up on the way to the Pole and several dog-team parties passed up and down, altogether, 14 of them. Brookes and I dog-sledged down in Feb-1958. At least one American sno-cat seismic party also passed this way in 1959.

We would like to show pix of all the main mountain ranges but so far have not been able to locate so much as a shot of Mt Kirkpatrick, Mt Fritjof Nansen, Mt Betty, the Patuxent Range etc. – contributions invited!

Antarctic mountains are seldom difficult but it can get cold up there, the worst danger is from frost bite. Without any rain to keep them clean, mountainsides are usually littered with rubble and loose rock.