<<The Adelie Penguin is the most common and most likeable of all the wildlife seen in the South. Unlike Over the Other Side, ie Grahamland, South Georgia, and the Weddell Sea, where they have many penguins, the Gentoo, the Chinstrap, the King Penguin, the Royal, the Rockhopper, the Macaroni etc as well as quite few Adelies, we have only two kinds, the Emperor (above right) and the Adelie nesting at or near the extreme southern ice-edge.

Adelie rookeries are on solid land, usually on a point facing the sun with good access to the sea without too much scrambling and of gentle slope. So there are rookeries on the northern side of Cape Royds, over on the eastern side of Ross Island north of Cape Crozier, and near Cape Bird. Further north there is one reported on Beaufort Island, on Inexpressible Island, one at Cape Hallett, and at Cape Adare and I have heard rumours of one on Coulman Island. There are not many on the mainland except at Cape Hallett and Cape Adare, probably because the ice packs in and open water is found close only rarely.

At Adare however, the tides are fierce and the pack gets broken up frequently. The number of birds has been counted every year for decades so we hope to prise these numbers out of someone. One of the ships tour companies reports 17 Adelie rookeries in the Ross Dependency with 55,000 pairs at each of Franklin Island and Cape Hallet with 160,000 pairs at Cape Adare, but we have no way of knowing at this point how accurate these guestimates are.

Adelies are quite capable of walking twenty miles just to have a look at your camp, but they seem to prefer open water or least a good open lead to dive into, not some pokey little seal hole. Through the winter the Adelie drifts north with the pack and stays near the edge of open water, in the spring he works his way south and by November is seen pottering about the ice-edges at the northern limit of McMurdo Sound and not far from the Rookeries.

If the snow on top of the ice is a little deep for walking in, the Adelie falls forward on his tum and pushes with his feet and progresses as a kind of motor toboggan, faster than he can walk. I think they begin nesting in early December, piling up a little ring of small stones, carrying them long distances, or stealing them off a neighbour who does not happen to be looking. They take turns in sitting on one or two eggs, the other going off to sea to stoke up in krill. How an Adelie on returning, recognises his girlfriend among a hundred thousand that you or I would swear were identical I do not know, but they can!

A snowfall in midsummer can be a disaster, sometimes the eggs become chilled and will not hatch, the Adelies sit on their nests, a head poking through the snow, waiting for it to melt. The chicks hatch about January and have a thick coat of grey down to begin with. Parents come back to the nest to regurgitate krill. Skua gulls hover about attempting to snatch a chick and get beaten off, an intruding human being is likely to get a slap across the ankles from a leathery flipper. By the time the new ice is forming the chicks are almost full-grown and have changed their grey fur for feathers and begin working their way north towards the open water.

Any open lead is likely to have a gaggle of Adelies standing on the edge of the ice, peering down to see if there is one of their ancient enemies, the Sea Leopards, lurking below. They swim by swinging their wing flippers in an oval motion, remarkably fast. Coming out of the water they can flash up at such a speed they can land standing on their feet on the top of an ice edge 3-4 feet above water level. A pursuing leopard merely gets his nose bumped.

They suffer heavily from the depredations of the Leopard Seals in the water and their eggs and chicks from the infernal skuas, but otherwise their life is tolerably carefree. Adelies are one of hardiest breeds of animal I have ever seen.

The Cape Royds Adelie Rookery Jan, 2003. Notice the well-worn trails, the subgroups of penguins and how few there are, not more than 400-500 pairs. This rookery has been in use since about 700AD. Notice also people wandering about, inevitably introducing foreign bacteria and virii.

Aerial view of Royds Rookery taken Jan. 2004. Note that of fifty nestingsites, only a dozen are occupied. Notice also the open water, so the excuse that the large tabular berg G16 has prevented the ice going out in McMurdo Sound leaving Adelies no where to feed does not hold. This rookery could be on it’s way to extinction, but as we said before, the Adelie is a tough little tyke though the constant hounding by hundreds of people must impart considerable stress. Panicing of the entire rookery by low-flying helicopters results in hundreds of smashed eggs and in nest desertions. A summer 2004 account says “Our helicopter flew low enough for us to plainly see the yellow patches on the Emperors necks.” Someone else who should be grounded! 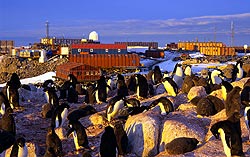 We would welcome pix of some of the other 40 “research” stations that crowd every bit of bare rock round the coast.

Edward Wilson believed for some reason that the Emperor was a very primitive animal. It is fact very highly specialised with the most curious breeding habits that could be devised.

They are quite massive, standing about four feet high or more and must weigh more than a dozen Adelies. Not always being scientifically-minded I have never weighed one, but they are quite hefty, maybe 80lbs. They are also very strong, in a hand to hand battle, rolling over in the snow and trying to pin one down, it is a good idea to wrap arms round his flippers as a clout across the ear will make a large man dizzy and persuade the most aggressive husky that he ought to go back to the doglines. Unless you have some standing at sumo wrestling or tae kwon do, you would be probably wiser to avoid unarmed combat. Emperors are bad losers, they fight fair (don’t go for your eyes) but get in some pretty telling body blows, they simply work in close and pound you!.

This is home usually to about 2400 adult Emperors.
Scott in 1902 found the first Emperor Rookery on fast-ice where the Ross Ice Shelf abuts against Cape Crozier.

The overhanging Ice Shelf towering 2-300 feet above protects them from the blizzard and the water out half a mile is almost always clear, a medium breeze at Cape Crozier being forty knots. They lay eggs of all appalling times in the middle of WINTER, and have a special pouch between their feet to keep the egg warm and away from the ice underfoot, which in July in middle of a Cape Crozier winter, would freeze the fires of hades. Edward Wilson, Apsley Cherry Garard and Birdie Bowers spent a month in 1911 journeying to this spot in the middle of winter to obtain an egg.

Cherry wrote a book about it entitled “The Worst Journey in the World” to my knowledge, no one has ever questioned the title. It was the worst journey that men have ever done, to any place anywhere and in any age. Cherry told me the jersey he was wearing had ice more than an inch thick in it when they returned and it weighed about 10 lbs. When they returned to Britain, he took the one precious egg they had been able to get to the British Museum, but none of the curators wanted it! One told him to go away!

Emperors have at least an inch of subcutaneous blubber and they mainly live on this until spring comes. Half way through the incubating period, the female hands the egg over to the male and heads off for a month of guzzling krill. Then the chicks have to be kept in the warm pouch, but come late spring when the ice breaks up, they all raft off into the Ross Sea.

Perhaps as a result, the Emperor is a serious bird; much more stately than the Adelie. A biologist once caught twenty and took them back to America for zoos. The Emperors did not like this, they stood in a ring with their beaks pointed upwards, they refused to eat or to walk or talk and ignored everyone, until they all died, just as a Kalahari Bushman will do if put in prison. I do not like some biologists much; they stick radios, meters, position-locators etc onto some inoffensive bird to track where he goes.

Nobody has ever asked a penguin what HE thinks of all this nonsense, or of not being able to hatch an egg without some ragged-looking thing with outrageously coloured feathers pushing a camera into his face, clumping through the rookery and making loud and offensive remarks like “God! What a perishing stink!” If you don’t like guano, stay away!

In 1955 we knew about the Cape Royds Adelie Rookery but I never went closer than half a mile; in fact I never really saw it until 1959 and even then never went closer than about 50 yards. As we sledged home a helicopter came over low down to get photos and panicked thousands of birds then came over us at a height of ten feet to get pix of a dog team and panicked my dogs as well as the other two teams behind.

I am quite a mild sort of chappie but if I could have got that pilot by the neck at that moment I fear he would have handled quite roughly! It turned out he was giving a new admiral a look round. The Admiral happened to visit our base that afternoon and I went over to sort of make his acquaintance as you might say and to express an opinion about certain matters, but he beat me to it.

“Goddam it!”, he says, “I am really sorry about the way we frightened your dogs today, I gave that pilot hell, and told him to haul-ass out of there. Join me in a drink!”
Admiral Tyree, like all good admirals is as much a good public-relations man as a seaman.

Some rookeries now get thousands of tourists rubber-necking each summer. Compared to a good blizzard I suppose a few garishly-clad tourists sticking cameras in your face is a modest cross to bear.
Incidentally, the guano up at the Cape Hallett Adelie Rookery, which is on an old flat sandspit is more than three feet deep! I wonder how many krill THAT represents?